Rhetoric is effective and/or persuasive writing or speaking, and figures of speech are one of the components of rhetoric. Both readers of and speakers of the English language enjoy encountering figures of speech, which can be clever, humorous, biting, visual — intriguing or memorable in some way. Thus writers who can employ figures of speech are more likely to win over their audience.

Because the ancient Greeks valued and taught rhetoric, most figures of speech have names that come from the Greek. I have to confess that I can use a figure of speech, knowing I have used it, without being able to remember its name.

Some sources state that anaphora [a NAPH o ra] is probably the oldest literary device of all. Anaphora is the repetition of a word or phrase at the beginning of successive clauses, and it has been used extensively by writers and speakers of all kinds. Walt Whitman used anaphora, as did Martin Luther King, Jr.

Then there’s antanaclasis [ANT an a CLASS is], in which a word is repeated in the same grammatical form (verb, for example, or adjective), but with two different meanings or senses. An example is the quote attributed to Benjamin Franklin: “We must, indeed, all hang together, or, most assuredly, we shall all hang separately.” In both cases hang is a verb, but in its first use it means to consort with, and in its second use it means to be suspended by the neck until dead. 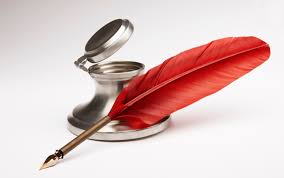 You can infer the importance of repetiton, both to the Greeks and to ourselves, when you consider how often repetition is part of a literary device. There’s anaphora, there’s antanaclasis, and there’s ploce [PLO see], which is the repetition of a word, often with intervening words between, and usually the second use of the word has a different meaning than does the first use of the word. “When the going gets tough, the tough get going.”

Metonymy [meh TON eh me] replaces the name of something with a word that is closely associated with the first thing. For example, when Christina Rossetti wrote “Never on this side of the grave again,” she was replacing the word death with something associated with death: the grave. In “The pen is mightier than the sword,” pen is being used instead of written words, and sword is being used instead of military force.

Metonymy is so much a part of our spoken and written language that we’re often unaware that we’re using a figure of speech.

And now, by your leave, I’ll leave you alone.

Barbara Gregorich employs figures of speech in her poems, published in Crossing the Skyway.

5 responses to “Five Figures of Speech”