A periodic sentence (often called a suspended sentence) is one in which the sense of the sentence is not complete until the final words. Here’s an example from Dylan Thomas’s “ A Child’s Christmas in Wales”:

As you can see, the meaning (sense) of the sentence isn’t complete or even clear until the words “it snowed and it snowed.” The snow is what the sentence is about.

Years ago I was writing a series of bear sentences for a possible children’s project, but, aside from the sentences, I wasn’t sure what the project could be. It was too short for a book. A series of cards? Posters? Placemats? I could never work this problem out, and so the project sits in my filing cabinet.

Except that, every once in a while, I revisit the compound-complex bear sentence just to laugh at the fact that the meaning isn’t clear until the very end.

Compound-Complex Sentence, Suspended
The bear who painted a large green pear won a purple ribbon from the judges, and the bear who painted a big blue square around the large green pear also won a purple ribbon, but the ribbons were quickly taken away after the second bear ate the first bear’s pear and the first bear squashed the second bear’s square and the judges.

Barbara Gregorich blogged about sentences in Sentences and Train Wrecks, but luckily no bears squashed her.

Painting from the Chauvet Cave, France

My experience with bears in literature was not and is not limited to children’s literature. When I was in my teens I read Faulkner’s short story, “The Bear” part of the collection titled Go Down, Moses. Old Ben, the bear, is hunted by many of the white characters in Yoknapatawpha County. Isaac McCaslin, the hero of the story, doesn’t kill the bear when he has a chance: instead, he saves the dog that the bear would have killed. The bear is finally killed by the dog Lion and the man Boon Hogganbeck, neither of whom share Ike’s ambivalence about taking the life of a fellow creature.

That’s a strong theme, and I understood why Faulkner chose a bear to symbolize the wilderness: a bear belongs there, a bear is the largest land-based carnivore, and those in tune with the earth would respect the bear and leave it alone. Those who don’t respect the bear and don’t leave it alone are blind to consequences and harbor a ruthless willfulness to destroy the natural world.

Not long after I read that short story, I took a college course in the origins of Indo-European languages. At that time scholars believed that modern-day Indo-European languages may have originated in the area of [the former] Yugoslavia, because key root words throughout most of these languages were words for bear and honey. In Serbo-Croatian and many Slavic languages, the word for bear is medvjed, which means, literally, honey-eater. In Old English, the drink made from fermented honey was mead. The roots are the same.

Today scholars have broadened the area they believe modern-day Indo-European languages originated in, thinking they came into being about 15,000 years ago, after the last Ice Age, somewhere in Turkey and/or Southern Europe. In order to determine this, scholars look not only at basic relationship words such as Mother (Matar, Mati, Mayr) and Father (pater, fadar, pitar, athir), but also at the different words for bear.

Recently I’ve learned that in many Proto-Indo-European languages, the word for bear was a taboo word, never to be spoken. (Shades of You-Know-Who in Harry Potter.) Thus arose expressions such as The Honey-Eater or The Brown One. Everybody knew who was being referred to, but nobody had to speak the forbidden word. If you spoke the word, then The Shaggy One might eat you. The same Shaggy One was also referred to as The Destroyer. 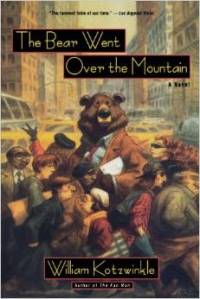 If there’s a modern-day book written with a bear character, you can bet I’ll read that book. One of the ones I recommend is The Bear Went Over the Mountain, by William Kotzwinkle. It’s about a Maine brown bear who digs up a buried manuscript written by a professor. The bear adopts the name Hal Jam and takes the manuscript to a New York publishing house: suddenly the book is a blockbuster and Hal is on a book tour.

Another bear book I love is Ursus Major, by Roberta Smoodin. The hero of the book is a dancing and wrestling bear owned by two hippies who use him as a meal-ticket. The bear decides he is being taken advantage of and leaves the hippies. Setting out on his own, he encounters colorful characters who welcome him into their world. He becomes an NBA star, and later works with a movie doctor. The story is about the bear’s learning that it’s necessary to flee those who want only to use you.

Literature includes nonfiction as well as fiction, and one of the nonfiction bear books I totally love is Summers with the Bears: Six Seasons in the North Woods, by Jack Becklund. The story of how Becklund and his wife encountered and formed a relationship with a particular bear in Minnesota’s north woods is beautifully told, without sentimentalism.

I hope to pass some of my love of bears on to you, so if you’re reading this blog, consider reading a bear book, for whatever age.

My earliest memories of anybody telling me stories are memories of my grandfather telling my brother and me stories about the rivalry between a fox and a bear. The bear wanted honey, but so did the fox. The bear was willing to put a lot of energy into procuring honey, but the fox didn’t want to work that hard. No, the fox preferred to trick the bear out of its hard-won honey. My grandfather must have told us dozens of the bear-fox stories, and the fox almost always won, due to the bear’s naivety and (perhaps) slower-functioning brain. The fox was tricky, cunning, lazy, and untrustworthy. I hated the fox. I loved the bear. Thus my love of bears in literature was born. Perhaps my hatred of injustice, too.

I’m not sure where other people’s love of bears comes from, but I can tell you that a huge number of people (artists, especially), seem to love bears. Take songs, for example. One of my favorites is Fred Small’s “Larry the Polar Bear,” based on a true story that occurred during the 1930s, when the Los Angeles Zoo took their born-in-captivity polar bear, Larry, to the Arctic to make a film. The humans assumed that Larry preferred captivity to the wild. Wrong!

My second introduction to bears in literature (after my grandfather’s stories) came from Grimm’s Fairy Tales, which my mother bought me when I was six or seven. Many of the stories enchanted me: “Rumpelstiltskin,” for one; “Seven Swans for Seven Brothers,” for another. But, especially, “Snow White and Rose Red” captivated me, from the moment the bear knocks on the sisters’ door and asks to come in and warm up, to the moment the bear swipes the evil dwarf’s head off. A dramatic finish, for sure. 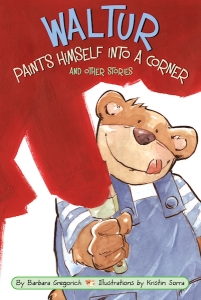 My conscious thoughts never ran along the road of writing about a bear, real or imagined. But my subconscious must have, because while I was researching my nonfiction book, Women at Play: The Story of Women in Baseball, I was also writing children’s early-reader stories based on idioms . . . and the character who could not understand idioms turned out to be a bear, Waltur by name.

These stories were later published by Houghton in two books, Waltur Buys A Pig in a Poke, and Waltur Paints Himself into a Corner. During the years I worked on these stories, I shared some of my thoughts with fellow writer Robin Koontz, who is, in addition, an illustrator and designer. 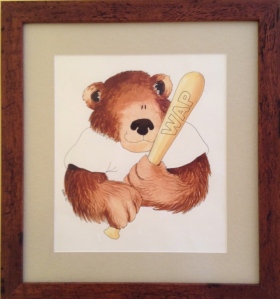 One day, a long cardboard tube arrived in the mail. It was from Robin. I had no idea what the tube contained, but I opened it eagerly. Inside was Robin’s version of my bear Waltur, holding a baseball bat in his paws. Notice the initials on the bat: WAP, for Women at Play. I thought that was very cool, combining baseball and bears. This gift hangs in my office and inspires me.

Bears are present in adult literature, too . . . and that’s what Part Two will be about.