Athabasca Pass is located in the Canadian Rockies, on the Continental Divide between Alberta and British Columbia. During the early 1800s it was an important pass on the highly lucrative fur-trade route, with furs trapped west of the Rockies carried eastward and shipped to England.

The first non-Indian to see Athabasca Pass was David Thompson, perhaps the greatest European explorer of the North American continent. David Thompson was Welsh, born in London in 1770. Although his family lived in poverty, he was able to attend the Gray Coat Charity School, where he excelled in mathematics. At the age of 14 he was apprenticed to the fur-trading Northwest Company and sailed to Canada. There he would have been a clerk working on books indoors, except for the fact that he broke his leg so badly that he spent a long time recovering. During that time, he was taught how to use a compass and sextant and locate the exact position of land forms by sighting the stars.

Thompson became so good at determining location that the rival Hudson Bay Company hired him as a mapmaker. In 1798 he mapped the upper Missouri River and the Mandan villages. When Lewis and Clark explored that area of the continent in 1804, it was David Thompson’s maps that they used.

Because Thompson used a sextant to site the stars and determine the exact location of rivers, lakes, mountains, and even forts, the First Nations people called him Koo Koo Sint — he who looks at stars. 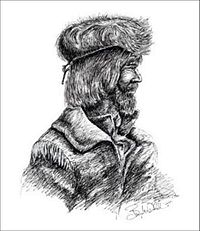 In 1807 Thompson was the first Euro-Canadian to cross Howse Pass in the Canadian Rockies. The native tribes such as the Kootenay and Piegan (Blackfeet)  had been using this pass for centuries, and shared its location with Thompson. Using Howse Pass, Thompson and other fur traders crossed the Canadian Rockies yearly, bringing furs back east.

But First Nations people (in this case the Piegans) resented being cut out of the fur trade business. They resented white people taking over their land. They especially resented that Thompson’s men traded weapons to the Kootenays and Nez Perce, who were enemies of the Piegans.  When David Thompson and his group of trappers tried to cross Howse Pass in 1810, he was warned away — the Piegans had blocked the pass. Even though Thompson was highly respected by the indigenous tribes, his life was in danger — he left Howse Pass and headed north, convinced he would find another way through the Rocky Mountains.

Thompson headed north during the month of November — winter was fast approaching. In fact, it had arrived in the Canadian Rockies. In preparation for heading north, Thompson and his group of thirteen hunters/trappers spent nearly three weeks building dogsleds and snowshoes.  With the help of an Iroquois guide named Tomas, they did find a pass further north. Thompson called it Athabasca Pass, after nearby Lake Athabasca. The pass was 30 miles long.

Thompson’s men grumbled all the way — the going was very, very difficult. In crossing, the men sank into snow up to their kneecaps. When they tested the snow with a 20-foot pole, the pole did not touch bottom. The temperature was minus 30 degrees, the winds howled, and there were no game animals to eat, so the traders were forced to eat dogs and horses, much like the Lewis and Clark expedition would do in Lolo Pass. 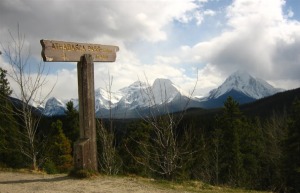 One man who made the crossing of Athabasca Pass wrote: “We were obliged to stop every moment to take breath, so stiff was the ascent. . . . On either side were immense glaciers or icebound rocks.” But where others saw difficulty, David Thompson saw beauty. He wrote that the pass was “a most exhilarating sight, but . . . a heavy gale of wind, much more a mountain storm, would have buried us beneath it. . . . . My men were not at their ease, yet when night came they admired the brilliancy of the stars, and as one of them said, he thought he could almost touch them with his hand.”

Despite the difficulty of the climb and the steeper descent heading west and the glaciers and the ice and snow, Athabasca Pass was a safer trading route than Howse Pass. For nearly forty years this far-north pass was the most-used pass in the Canadian Rockies. the main route used by traders of all kinds. But then, with the coming of the Canadian Railroad, the pass was abandoned by traders and travelers.

During the 28 years that he worked out west, David Thompson traveled 55,000 miles and covered eight million square miles of land. He explored the entire length of the Columbia River, which runs from the Continental Divide into the Pacific Ocean. He found the headwaters of the Mississippi River and mapped the lands and waters around them. 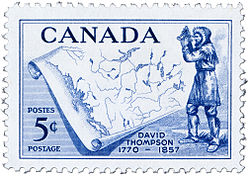 After the War of 1812 between Britain and the United States, David Thompson was asked to map the new borders — both sides accepted his findings without question. And much later, when he was 58 years old, Thompson was asked to determine the boundary between Canada and the United States from Lake Superior westward. Again, his decision was accepted without question, so great a cartographer was he, and so trusted. Many have called David Thompson “the greatest land geographer ever.”

In 1971 Athabasca Pass was declared a National Landmark by Canada. It lies in the southwest corner of Jasper National Park and is enjoyed by hikers. Blazes left on trees by Thompson and his men two-hundred years ago are still visible.

Centuries of slumber
broken by a brief flurry
of fur trade glory,
and then a rolling over
and back to sleep.