One month after I published She’s on First, I began giving public presentations titled How to Self-Publish through Amazon’s CreateSpace. These talks were much in demand, and over the course of the last eight years, I have probably aided close to 1,500 people who want to know how to self-publish. I myself was so happy with the experience that toward the end of 2010 I self-published another book, Research Notes for Women at Play: Volume 1. After that, I usually self-published one book a year, and on occasion two.

Once or twice a year (depending on the rate of change at CreateSpace), I would update my presentation to show how things were currently done. When I started out in 2010, for example, CreateSpace did not offer users a manuscript template: a year or two later it did.

Because covers help sell books, I wanted strong, attractive, well-designed covers on my books — so I did not use CreateSpace’s Cover Creator tool. Instead, my covers were designed by friend Robin Koontz, a writer, illustrator, and designer whom I’ve known since the 1980s.

However, in 2017 I decided to use CreateSpace’s Cover Creator, just so that I could show people what they would encounter when they used this tool. I actually had no plans to self-publish a book that year, but in order to use Cover Creator, I had to publish one. So I collected twenty-four of my blog articles on writing and published them under the title Xenia Steered the Boat. I didn’t expect this book to sell, because, after all, the articles are free online.

Friend and artist Sandy Katz allowed me to use a boat from one of her oils as part of the cover of Xenia Steered the Boat. I found it great fun to use CreateSpace’s Cover Creator. There were 30 different covers to choose from, and the title of the book, the subtitle, the author’s name, and all the back cover copy automatically flowed onto the chosen cover (based on information I had previously filled in on CreateSpace).

I could doodle around with colors, images, fonts, and the like. And I did. 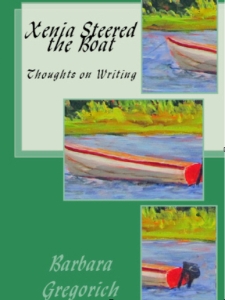 Because Xenia Steered the Boat had fewer than 150 pages, it could not have the book title or author name on the spine — the tolerance of the Print on Demand printing machines is such that they might print part of the spine wording on the back cover. Or on the front cover. Therefore: no spine wording.

The CreateSpace Cover Creator template was programmed so that if your book was fewer than 150 pages — the program would not flow the book title or author name onto the spine. When you looked at your template, you saw the back cover and the front cover. But you did not see anything printed on the spine. Because nothing would be printed on the spine.

In self-publishing Xenia Steered the Boat, I was able to take students through the step-by-step process. And they could hold in their hands the actual Xenia book (because I bought copies to take along to presentations).

In 2018, I gave my How to Self-Publish with Amazon’s CreateSpace presentation in June. And I was scheduled to give it again on October 27 and December 8.

Until, in late August, I (and thousands of others) received an email from Kindle Direct Publishing, announcing that KDP and CreateSpace had merged and that CreateSpace would cease to exist as of October 2018. All of the titles published through CreateSpace would be transferred to KDP.

But . . . I was scheduled to speak on self-publishing through CreateSpace! Like — two months away!

By that time — CreateSpace would have ceased to exit!

What was I to do?

For that, you will have to read Part 2 of this blog, coming up in two weeks.

She’s on First, Barbara Gregorich’s first self-published book, is still available at bookstores everywhere, as are all of her CreateSpace titles.