After publishing my first volume of poetry, I turned to the exacting task of constructing Volume 2 of Research Notes for Women at Play. Just as with Volume 1, I first created a template and then typed my book into that template. (For all my other books, I wrote the book first and then pasted the manuscript into a blank template.)

There was so much formatting involved with all three volumes of Research Notes that I just felt more comfortable doing everything in the template itself, thus decreasing the chance that I would create some inadvertent error if I were to transfer the manuscript to the template. 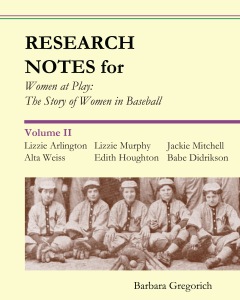 Not long after publishing Volume 2, I was hit with a desire to write a book on how to write a mystery novel. I’ve been reading mysteries since I was eleven years old, and mysteries account for perhaps 50% of all the books I read. As an avid reader, I find that over the years I’ve developed annoyances at certain things I encounter in some mystery novels — and if I encounter them, I do not continue to read that author’s books.

I’ve published two mystery novels, and while writing my second one, Sound Proof, I created charts and graphs. These allowed me to track the appearance of minor characters, track their motives, and always be aware of where all the characters were within the setting. I drew a diagram of the farm and buildings where the action took place. I made certain that the minor-character villain was present often enough to register on the reader’s consciousness. I tracked all the elements important to developing plot, character, tension, and resolution.

One day (who knows why) I was struck by a desire to explain some of the things a mystery writer should consider in order to write a mystery that doesn’t cheat, doesn’t sound improbable, and doesn’t annoy the reader. So, pulling out all my saved materials for Sound Proof, I wrote a 25-chapter outline for my to-be nonfiction book and then, week by week, wrote the manuscript. And, because most of the books I’ve written are not mysteries, the guide contains a lot of information on writing in general. (Reviews have pointed this out.) 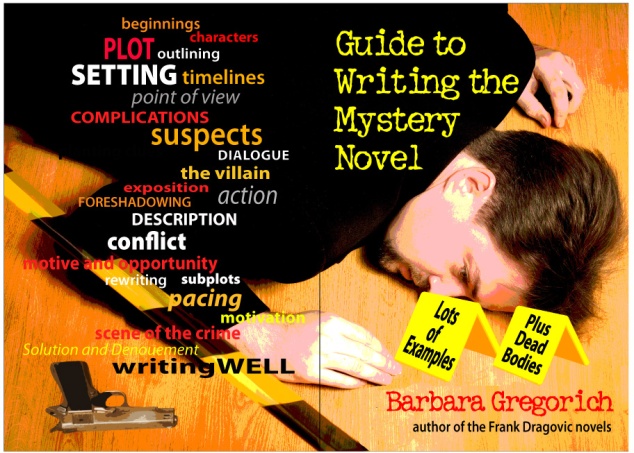 And now back to the process of self-publishing my how-to. With this how-to, which would become my eight self-published book, I ran into a word-processing roadblock. Fitting all the charts and graphs into my 6”x9” template proved impossible: there was something about Apple’s Pages program that didn’t allow a long chart (three pages long, say) to flow from one page to another. Instead, I had to chop the chart into pieces that would fit on each page. And even then, I couldn’t make it work. So, as before, I asked friend Robin Koontz if I could hire her to format the document. Robin agreed, producing a publication-ready template — but even she thought it was difficult to do.

Of all the titles I’ve come up with for my self-published books, this one is my favorite: Guide to Writing the Mystery Novel: Lots of Examples, Plus Dead Bodies. The title promises information, lots of examples, and humor. The book, I think, delivers those things.

Guide to Writing the Mystery Novel: Lots of Examples, Plus Dead Bodies, was published in October of 2014. It soon became my best-selling self-published book. To this day, Guide battles with Jack and Larry for the number one position in my monthly sales.

After I published Guide in 2014, I dove into the work of publishing the final volume of Research Notes to Women at Play. I self-published the first volume in 2010, and the third in October of 2015. 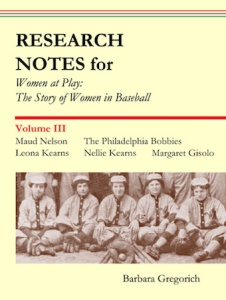 If you’ve been reading these posts on my self-publishing adventures, you may remember that I intended to donate my thousands of pages of research notes to the Baseball Hall of Fame . . . but then I got the brilliant idea of self-publishing a portion of the notes.

So, after the third volume was finally published, I began to organize my notes, so that I could deliver them to the BHOF in a neat order. I began in November, 2015, and I finished in July, 2016. The project was a big one. I delivered the notes in August, 2016. And then I spent the rest of the year catching up on what I had neglected while organizing the notes. So I did no self-publishing in 2016.

In fact, I thought it was unlikely that I’d self-publish anything for two or three years. But such was not the case.

Guide to Writing the Mystery Novel: Lots of Examples, Plus Dead Bodies vies with Jack and Larry for best-selling of Barbara Gregorich’s self-published books.