Multiple-ending stories are a kind of fiction in which the reader decides which plot path to pursue. The concept for the first wave of interactive fiction books, Choose Your Own Adventure children’s books, which were hugely popular during the 1980s and 1990s, was developed by Edward Packard in 1976.

The Choose Your Own Adventure stories had plots that branched out in several different directions. Think of a branching-plot novel as one in which the reader climbs up the main trunk of a tree, then chooses a branch to follow. And from that branch, another branch. And so on. In order for a branching story to move forward, the reader has to make choices very soon after the story starts. Each decision leads to further decisions, and this continues until the chain of decisions leads to an ending (or sometimes not!). In some of the books, 40 different endings were possible, and the ways to reach those endings varied. In other words, if on page four the reader chooses Option C, that doesn’t mean that Option C will always lead to Ending #15. Depending on the choices after C, a reader could end up with a different ending. Ending #24, say.

The Choose Your Own Adventure books were so popular that at least twenty other similar series were published. (Nothing inspires imitation like success.)

In a tree, branches do not double back on themselves and end up where they began. In a book or a game (as computer gaming, role-playing with action and consequences), though, readers/players may end up back where they started. This isn’t ideal, and it isn’t common — but it is possible, depending on the fiendishness of the branching-plot constructor.

Back in the early 1980s, I was asked to write a series of computer stories with branching story lines. These were for first- and second-graders learning English as a Second Language. At that time there were no books or articles I could find that explained how to write branching stories, so in order to understand what I needed to do, I read seven or eight Choose Your Own Adventure books.

Armed with an understanding of how these books worked, I spread many 3×5 notecards out on my dining room table. What I wrote on one notecard would serve as one computer-screen worth of text. I also had pens in different colors of ink, plus a paper tablet and blank paper. Knowing that classical music, particularly Baroque, affects brain waves and analytical abilities, I put several Bach CDs on. Then I began work on the first of many stories (I think the work-for-hire assignment consisted of twelve branching stories).

The Baroque music did stimulate my brain. The first thing I did was create the first two computer frames of the story. On my diagram, these are frames A and B. The story is about Crandall, a hermit crab, outgrowing his shell and looking for a new home. 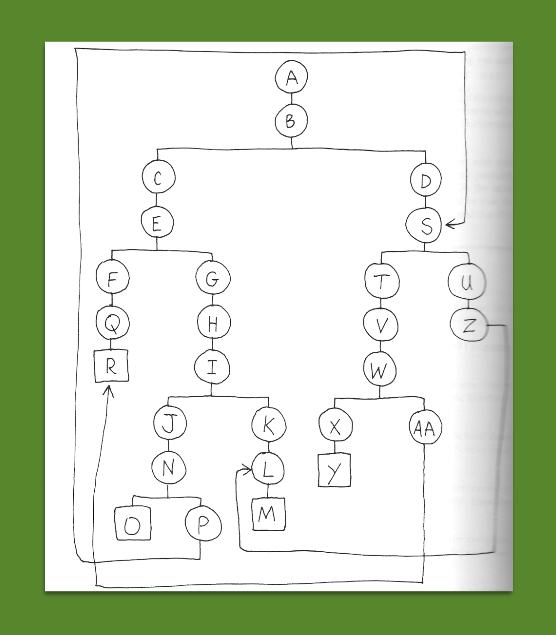 Then I considered various ways Crandall’s search could end, and I wrote four endings. These have squares around them on the diagram. They are R, 0, M, and Y.

Next, I put the diagram aside and began writing individual “frames” (parts of the story) for the results of the C choice. That branched further into a choice between F and G. The F choice ended the story at R. The G choice, however, led to another branch, a choice between J and K.

The J choice eventually led to a choice between O and P. O ended the story. But P did not — P actually took the story all the way back to the second step of the D choice. If you study the diagram, you can see that some of the choices lead to unexpected results. That was fun.

Here’s what my notecards looked like. Each notecard is one computer frame’s worth of story. 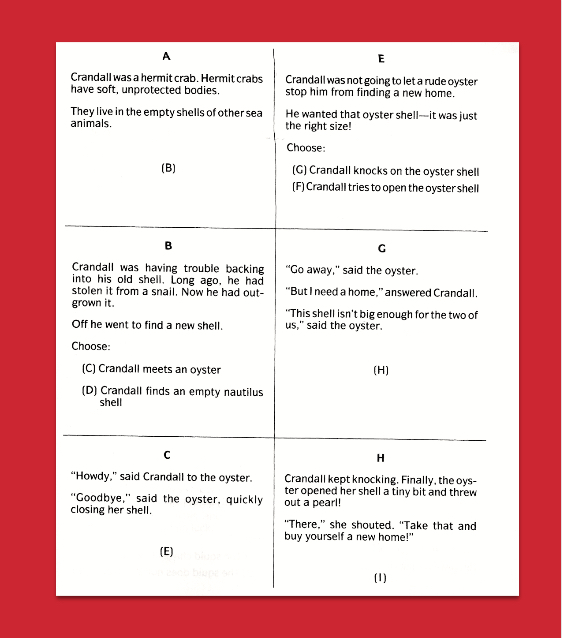 I remember that it took me two eight-hour sessions to develop the first of these branching stories. It was indeed a lot of fun, but also a lot of very hard work. In some ways, this branching-story assignment was the most complex writing assignment I’ve ever had. I had to be able to think of different plot possibilities. Instead of choosing one possibility over the others and following the story to its cause-and-effect conclusion, I had to juggle the plot possibilities and keep each and every one alive. And make certain that each led to a cause-and-effect ending.

And these were very small stories for first- and second-graders. Imagine all the possibilities that a game creator must juggle!

Barbara Gregorich suggests you listen to Baroque music while reading her Guide to Writing the Mystery Novel: Lots of Examples, Plus Dead Bodies.