In fiction writing there’s an endless debate over which is more important when you’re coming up with a story: character or plot. Personally, I don’t believe that one comes before the other, but that’s because when I’m planning a story, character and plot (as well as setting) come to me at the same time. I can’t create characters without at the same time creating their struggles — and their struggles and actions are the plot.

More than 2,000 years ago Aristotle, in his Poetics, explained what plot was: a series of causally related events. Aristotle considered plot the single most important element of drama, and he believed that it was plot which had the ability to arouse emotion in the audience.

But even though plot events need to be understood in linear order, they need not be presented to the reader in that order. For example, in my novel She’s on First, the first event is baseball scout Timothy Michael Curry sitting on the bleachers in a college stadium in Pennsylvania, watching the Liberty Bells play a game. That could be considered Event A . . . except that the story gives an immediate flashback to a Little League game several years earlier. This event (let’s call it Event B), appears to be the cause of Event A. But about two-thirds of the way into She’s on First there are more flashbacks, revealing that Event B was not the precipitating event. It, in turn, was caused by previous events.

No matter how complex the order of telling a story (and She’s on First is of very minor complexity — there are some super-complex novels out there!), the chain of events that form the plot can be reconstructed in linear order, joined by cause and effect. 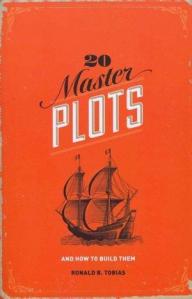 I highly recommend Robert Kernen’s book, Building Better Plots. He defines plot in this way: “The arrangement of events in a story to elicit a desired effect on the audience. A series of events organized to progress from inciting incident through rising action to climax and finishing with the resolution.” Aristotle, who felt that drama should achieve an intended effect on the audience, would have agreed. Good writers create plot points that reveal who their characters are.

Another good book on plot is Ronald Tobias’s 20 Master Plots: And How to Build Them. When I first encountered this book many years ago, I thought that a book which compressed all plots into one of twenty types couldn’t possible help me.

I was wrong. Writing a novel is a complicated business, one that requires rethinking, restructuring, and rewriting, and during that process it’s often necessary for the writer to remind herself what the story is about: What is the basic plot? During that complicated process, it often helps to question the basic nature of your plot. Are you writing a Quest plot? An Escape plot? A Rivals plot? A Riddle plot? Or maybe an Underdog plot? According to Tobias, each plot requires a certain structure. His book helps you understand that structure and develop it.

The fact that plot events are related by cause and effect gives a novel great continuity. The plot events, and the character choices based on plot events, help expound the novel’s theme: the observations the author is making about life.

Writers to whom plot comes first don’t necessarily neglect character. They trust to the plot to reveal character.

An example of how good plotting can result in greater character development is the example of Earl Derr Biggers. Back n the 1910s Biggers was a very successful novelist of popular fiction. He was, as well, a playwright and collaborator on other plays. In 1920 he and his family took a long vacation from New York through Canada, down into California, and, finally, to Hawaii. There, lying on the beach at Waikiki one day, Biggers came up with the idea of “how to commit the perfect murder.” He was so excited by this that he wrote to his editor about it.

It would be four years before Biggers found the time to return to his “perfect murder” plot, but when he did, he of course created the characters who would carry out the plot. One of the characters Biggers created was Chinese-Hawaiian police detective, Charlie Chan. This character became popular around the world, from Sweden to China, and places between. The Chan novels were translated into 33 different languages.

From a plot, Biggers was able to create a character who became bigger than the plot.

Barbara Gregorich discusses different aspects of plot in Guide to Writing the Mystery Novel: Lots of Examples, Plus Dead Bodies.