New Year’s Day is a good time to start the year off right by sharing with others, and so I’m sharing a chapter from my book, Guide to Writing the Mystery Novel: Lots of Examples, Plus Dead Bodies. In 2014 I shared both Chapter 9, “Summary, Scene, and Conflict” and Chapter 10, “Subplots,” and now I’m sharing Chapter 5, “Minor Characters.” (At this rate you can read the entire book for free . . . over the next twenty years.) 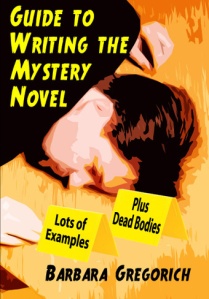 To Name or Not to Name
There are two levels of minor characters. The first kind play a role in the book. They speak, they act, they interact with the protagonist. Because they speak, act, and interact, a writer will think about these minor characters and develop them to a certain degree.

The second kind of minor characters are those who have one short function in the novel and aren’t heard from again. Or if they’re heard from again, it’s merely in the same capacity or function as they first appeared. You might consider these to be minor-minor characters. In Dirty Proof the doorman of the building Suzanne lives in falls into that category, as do several of Suzanne’s fellow typesetters. In Sound Proof I usually have Frank refer to the sheriff’s deputy as “the deputy” rather than by name. The job description is easy for readers to remember, especially in a novel that contains many characters.

The rule-of-thumb I try to follow in writing a mystery is: what would my protagonist observe and need to know? How would he behave? If my hero were a cop investigating a case, I think he would take down the name of practically every character he encountered. Although, in order to not burden the reader with unnecessary details, this could be written as “I wrote her name in my notebook.” If the point of view is third person: “Khrank wrote the doorman’s name in his notebook, right under the name of the concierge.” But if, later, this doorman were to play a role in the book, perhaps because his last name turned out to be the same as the last name of the murder victim’s brother-in-law, then the writer needs to give the name as the protagonist writes it down — else the writer wouldn’t be playing fair with the reader.

If your hero is an amateur detective, whether or not she notes or writes down or remembers the name of the doorman or the concierge all depends on how observant she is, how conscious she is of gathering evidence, whether or not she intends to question this person, and a whole host of other things. An amateur detective doesn’t have the status, authority, or training of a member of the police force, nor that of a private investigator (who has had training). In some ways you have more freedom to allow your protagonist to slip up when you’re writing about an amateur detective. Or to be way nosier than even a private detective might be.

How you write about your minor characters depends on who is telling the story (point of view will be discussed in a later chapter) and what kind of detective she is. If you stay true to what your hero would say and do and observe, you will name or not name your minor characters appropriately.

Function of Each Character
Minor characters serve a function in the novel. They might be used to move the plot forward by providing information, for example, or by taking actions that clarify things. Or by saying something relevant, perhaps without knowing that they’ve done so.

As you create minor characters, you will find yourself giving some of them names and even occupations. Perhaps you know the physical description of some of them, but not all of them. Let your instincts guide you in this respect, as they guided me. Here are a few of the minor characters in Sound Proof, with notes I made before I began writing the novel.

Personnel
Nola Grayson — Mary’s attorney, conference go-to person
Function: reflects light on Shelby Stubbs; reveals what could be a motive for murder; is a contrast to Mary

Teachers
Kofi Quay — African drummer
Function: as an outsider to American culture, he comments on that culture; he quietly teaches others, including Frank, the power of music

Students
Cindy Ruffo — mountain dulcimer player
Function: adds to the setting by her background and behavior

Because these minor characters speak, act, and interact with Frank Dragovic during the course of Sound Proof, I had to flesh them out. I needed to know some of their externals and internals: personality and character. Here are my notes on Cindy Ruffo:

Students
Cindy Ruffo — mountain dulcimer player — has a family, husband and seven children, from Missouri, drives an old van she lives out of during the festival, makes her own clothes, religious, believes in the devil, she saves her money (of which there is very little) in order to come to Midwest Music Madness once a year. She saved her money to buy a beautiful mountain dulcimer by a well-known luthier: this instrument was stolen at Midwest Music Madness.

As my notes indicate, I created minor character Cindy Ruffo for several different reasons. I wanted to show that many people who play folk music and attend festivals are poor people: music is a joy they can create for themselves and in company with others. This aspect of Cindy contributes to the setting of Sound Proof. I also wanted to show how important a musician’s instrument is to him or her, whether that person is rich or poor. The instrument has a personality and a life for the musician, and the loss of an instrument (especially through theft) is a physical and emotional blow. The instrument is mourned. Sometimes avenged. In the face of murder (that of Shelby Stubbs), some readers may cast aside any concerns about theft. But I wanted Frank’s initial job — finding the instrument thief — to remain important. The more the reader feels empathy for Cindy, the less the reader will undervalue Frank’s search for the thief. Finally, at many of the musical festivals I attended there was always a small group which played and sang religious songs, sometimes all night long. Cindy helps me show that segment of the folk music tribe. In short, Cindy is not only a developed minor character in Sound Proof, she serves certain story and setting purposes.

When creating minor characters, ask yourself what purpose each one serves. To complicate the plot? To shine light on a problem? To enrich the setting? In a mystery it’s very easy to create minor characters who serve only the purpose of providing information that the detective needs. Try to make your minor characters serve more functions than that single one.

Combining Characters
In creating minor characters (and major ones, too), you might, in the planning stages of your novel, end up creating too many. Not too many for the pages of the novel to handle: novels come in all sizes. But too many for readers to handle. When you give your novel over for critique, listen to whether people are confused by certain characters. Usually the reader will say something like, “I couldn’t keep A and B straight.” Or, “I couldn’t tell U and V apart.” Or, “I kept forgetting who Z was.”

After I finished Sound Proof I asked readers to critique it. And one of the most frequent remarks I received was that readers found it difficult to distinguish between various minor characters. (Remember: I needed more minor characters than you will probably ever need, because I was writing about a festival.)

Six months after I rewrote Sound Proof, I had no idea who the deleted characters had been or what function they had served. Zero idea. In retrospect, I didn’t need these characters at all. You too, either in your initial writing (moving the story from notecard or outline stage to manuscript stage) or in your rewriting, may find the need to combine either major or minor characters. If some instinct tells you to do so, I highly advise doing it. Better to have five minor characters, each of whom the reader finds memorable, than to have fifteen whom the reader fails to recognize. 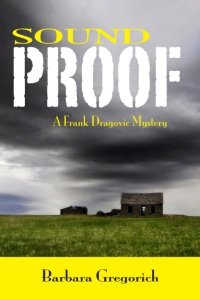 The dead bodies are few, the examples plentiful in Guide to Writing the Mystery Novel: Lots of Examples, Plus Dead Bodies.