I do not churn out novels, I do not churn out nonfiction. (I used to churn butter on my aunt and uncle’s farm, but that’s another story.) My books are researched, written and rewritten, critiqued by peers, and rewritten. Then they’re rewritten again, until the story is tight, logical, dramatic, and told in the best language I can write. It is difficult for me to put a 99-cent price on such work.

Never did I think I would sell one of my ebooks for 99 cents. But now I’m selling one for just that amount. 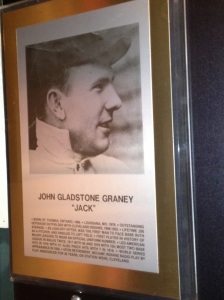 In order to honor Jack Graney, who is one of the ten finalists for the Ford Frick Award given by the National Baseball Hall of Fame (see Jack Graney and the Broadcasting Dawn Era), I gave a lot of thought to lowering the price of my 2012 book, Jack and Larry, from $3.99 to 99 cents. Doing so might give more people an opportunity to read the heartwarming story of Jack, Larry, the Cleveland major league team of the 1910s, and the long pursuit of the pennant.

Should I? Shouldn’t I? Would lowering the price to 99 cents, even temporarily, cheapen the public’s perception of the book’s worth? Back and forth I went, back and forth.

Finally, I flipped a coin.

Larry had a tail!

It wagged when he was happy.

Taking this as a sign, I have lowered the price of Jack and Larry to 99 cents, from now through December 9, 2015 — that’s the day the National Baseball Hall of Fame will announce the recipient of the 2016 Ford Frick Award.

If 99-cent ebooks attract you, consider this limited-time opportunity to add Jack and Larry to your e-reader.